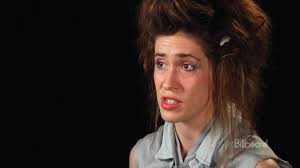 “Can’t take it in” sang Imogen Heap in the 2005 movie, ‘The Lion, the Witch and the Wardrobe.’ It is just one of many original compositions by the award-winning artist. Heap is successful as composer, performer and producer.

Heap was born in late 1977. This means that she was not yet fourteen when the World Wide Web was established by another Briton, Tim Berners-Lee. For Heap, it was inevitable that her music career would be conducted through the portals of the information age and all of the disruption that has affected the music industry. Napster was released in 1999 (Heap was twenty-one), and its users peaked in 2001 before enforced closure. iTunes was launched in 2001 and Spotify in 2008. Different to previous generations of artists who earned money through complex retail and licensing arrangements (primarily record sales), Heap’s career has been conducted against the economic uncertainties of the era of digital music.

Once, music piracy was the primary source of loss of earnings amongst artists but later it was joined as a source of ire by the economic power of the large digital platforms, especially streaming platforms. Artists Taylor Swift and Thom Yorke have been vocal and active critics of these platforms and the rearranged value chain that they represent. On Twitter, but of Spotify, Yorke stated, “Make no mistake new artists you discover on #Spotify will not get paid. Meanwhile shareholders will shortly being rolling in it. Simples.”

Seeking artistic freedom and rewards for that artistry, Heap has been the most prominent artist/entrepreneur associating with the Blockchain. The Blockchain (a distributed ledger) allows content to be securely tracked across the internet. Transactions are potentially secure and, because of smart contracting systems like Ethereum, potentially automated. Any user on any enabled site can pay for access to Heap’s work (or the work of any other artist or any other kind of artist) and smart contracts can manage payment of royalties, not only to the primary artist but across the supply chain (e.g. to session musicians, or the music engineer).

Entrepreneurially, Heap has developed these concepts through her Mycelia site, as well as associating with the blockchain startup Ujo. She has brought a new music industry into prospect. This new industry will be oriented around the artist. It is not a return to the pre-internet era of music publishing companies and record labels, nor is it the further development of the large-scale platforms and streaming services. In the next era, a common artistic repository based on blockchain technology will allow content to be tracked to its source and payments made. It represents a new business model, a new value chain and a new utilization of both a centralised repository and decentralised control.

In 2017 in the Harvard Business Review, Heap wrote: “I believe that featured artists – those “on the cover” – should inevitably be entrusted to ensure that everyone involved in creating music in their name will be duly acknowledged and compensated. The blockchain effect has inspired creatives in the industry that a better future lies ahead. If guided and nurtured in the right ways, blockchain holds the potential to give us a golden age of music not just for its listeners, but for those who make it, too.”

Earlier, in 2015, to Forbes magazine, she said, “Now it feels as if the music industry is a complete mess, a rusty, overstretched, tired machine. Grappling with a lot of old crooked contracts that don’t reflect our times, music services that run on greed to please shareholders smothered in buy-buy-buy adverts, dated accounting setups favouring anyone but the artist thanks to gross inefficiencies, confusing royalty statements and delayed payments (if any at all), coupled with the music itself not always being tagged effectively, and thus leading to mistakes… plus patchy copyright databases. It is almost impossible to find out who REALLY gets what. I’ve lost sleep in the past, scratching my head over the small print, with an icky feeling maybe I was selling my soul to do what I love. And, at the end of it all, more times than not, we are listening to seriously degraded quality sound files, on tinny speakers or trendy hyped up headphones lacking quality sound. Artists and music, deserve better.”

Should you wish to read more from the book you can order it in hardback or kindle form by clicking on this link: Entrepreneurship, Innovation and Technology: A Guide to Core Models and Tools.